Villa with a View in Ptolemais as a typical house of a wealthy roman citizen, is decorated in the most common manner of the empire period. Mosaic floors and wall paintings, as representative examples of roman provincial art, display  relatively high artistic value. Preserved decorations appear mainly in peristile and surrounding rooms, in some places within five chronological phases.(fot.1) Layers  placed direcly on the wall surface are the thickest (a few centimeters). Many different materials, such as broken ceramic and glass vessels, animal bones and small stones, was added during preparation of the wall surface before plastering. Each layer of plaster is of similar thickness (0,5-1cm) and has a good cohesion. Because of that paintings are preserved on relatively vast surfaces. Layer, which was to be covered with the new one, was prepared by hitting with a hammer in many places. The aim was to increase the adhesion of new plaster. Nevertheless, while recovering, many fragments fell off the walls. 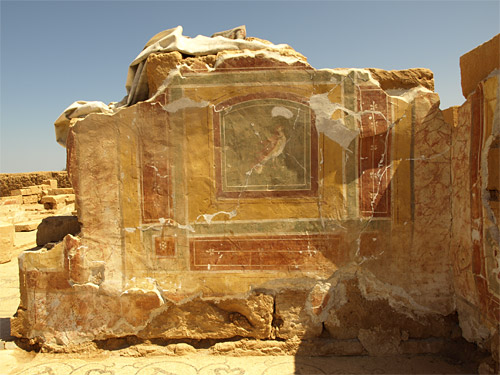 The painted surface is smooth; probably some fine materials such as marble powder were used. Paintings are made on lime-sand plasters and the technique is fresco- pigments mixed with arabic gum  were applied on the wet surface. Paintings are mainly imitations of marmor slabs, the patterns are depicted with precision and the kind of marble can be easily recognized. (fot.2) Decoration includes imitations of the most popular kinds of stone that were used in roman empire such as cipollino verde, giallo antico, marmo proconnesio, greco scritto, rosso antico and porphyrs- red and green.  Imitations are not only accurate but also of a high artistic value. Artisans must have been well-trained since they skillfully used different kinds of brushes to arrive at desirable effects. Moreover, they worked fast, without any visible mistakes and corrections. 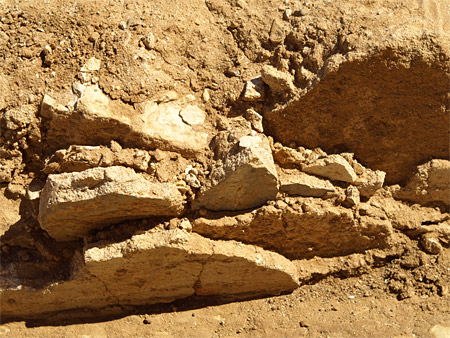 Decoration was divided into three horizontal parts, the lowest part presents horizontal slabs and the upper, vertical ones decorated with  geometrical figures. (fot.3) The third level, not preserved in situ, was probably decorated with figural motifs and floral ornaments. The most interesting painting preserved in situ features a bird surrounded by geometrical frame. One more bird was found among detached fragments from the same room. 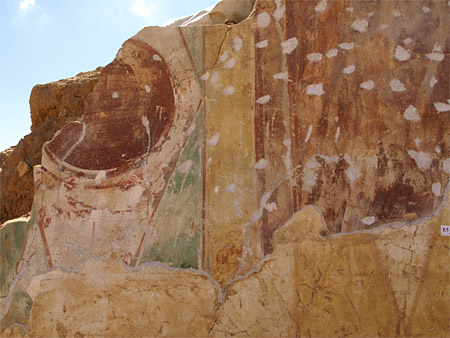 Preparational drawing was made with red pigment, vertical and horizontal lines were matched by cord covered with paint. Decorations of each phase do not differ a lot; most of the slabs are of similar dimensions. Circles were made with a pair of compasses, the marks of which are still visible. Composition was adjusted to each particular wall but differences are not significant.(fot.4) 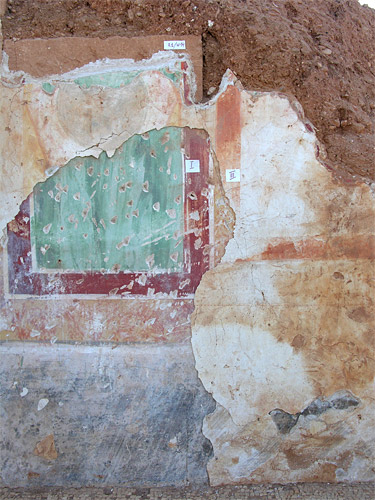 State of preservation of particular layers differs, which is due to environmetal factors (such as earthquakes, winds, sun, humidity) and technical quality. All layers are more or less faded, cracked, crumbled or displaced. Layers best preserved are at the same time the oldest ones and made in the most professional way. Partial destruction of the paintings was the main reason of transfering to the local museum. 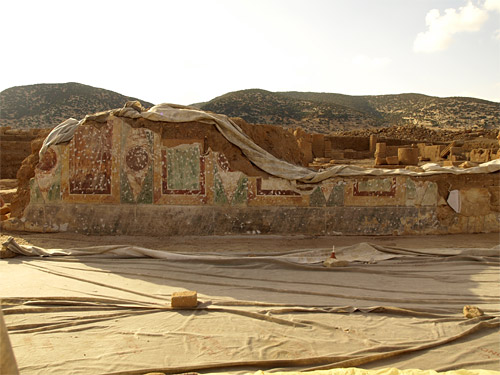