The excavations conducted by the Polish mission yielded more than 1000 coins. These finds have helped to reconsider Cyrenaican coinage in both the Hellenistic and Roman periods, especially with regard to local issues from the beginning of Imperial rule. They also permitted the observation of a series of interesting phenomena, such as the characteristic halving of bronzes in the last decades of the 1st century BC and in the first half of the 1ast century AD.

In 2006 a hoard of Roman coins was discovered in one of the rooms situated along the street. These rooms formed a complex of a clearly industrial character, functioning in close connection with the “Villa with a View”. The hoard totaled 568 coins, including 553 sesterces and 15 silver ones found in situ, plus 18 bronze ones from neighboring rooms.
In 2007 the discovered hoard underwent conservation. 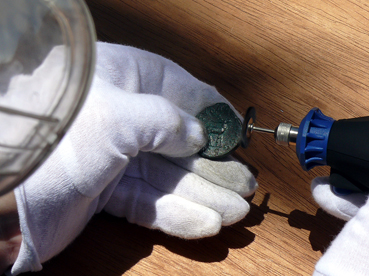 The goal of conservation was to stop the corrosive processes and to make legible the images, scenes and legends on the coins, revealing most fully their historic and scientific value. Gypsum casts of all the coins constituting the hoard were made in synthetic moulds, totaling more than 1200 casts of the obverses and reverses. With permission from the Libyan Antiquities Service, this research material was taken to Warsaw for study.