Since 2001 the Institute of Archaeology of the Warsaw University has conducted excavations in Ptolemais, an important antique city in Cyrenaica (Libya). Apart from research works on the new urban plan of Ptolemais (officially established in the III rd. c. B.C.), excavation works are carried out in vicinity of the famous Palazzo delle Colonne. 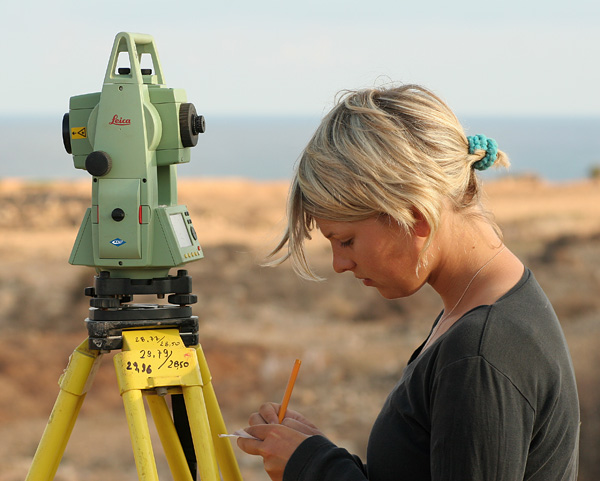 The main goal of this project is to obtain new information concerning the architecture of one insula (quarter), thus broadening our knowledge about the living conditions of the inhabitants of the city from the Hellenistic period to the appearance of the Arabs in the mid VII th, c. A.D. At present, we have uncovered one, very well preserved house dated to the III rd. c. A.D. with a rich decoration of its central, residential part, concentrated round a four column peristyle. The courtyard and the dining rooms were decorated with mosaics, showing both a geometric motives and figural scenes. Among the most interesting is a mosaic depicting sleeping Ariadne, Dionysus and his thiasus. Two mosaics, in the peristyle and in the dining room, bare the name of the owner of the villa, Leukaktios. The walls of the villa were decorated with colorful frescos, imitating different marble revetments with geometric designs. Several of the walls are covered with figural paintings, mainly depicting various species of birds.

Southward of the residential part of the villa another complex of rooms, situated round a small courtyard (atrium) was discovered. These rooms, of clearly domestic character, were used as living quarters and storage space – several large containers for agricultural products were found. In this complex several cisterns were also uncovered, supplying water for the house. Inside them fragments of coarse pottery (kitchen ware) and valuable marble statues were found.

The history of the villa, as of the entire city, was connected to earthquakes which cyclically occurred in Cyrenaica, notably in the mid III rd. c. and in 365 A.D. These earthquakes determined the subsequent phases of functioning of the villa and caused the decline of this elegant residence in the IV the c. A.D. We owe the discovery of the hoard of coins (dated to the II and III rd. c. A.D.) to the occurrence of the III rd. c. earthquake.

Nevertheless the city continued to function and develop after the earthquake. The abundance of cisterns in this part of the insula led probably to the opening of pottery and metallurgic workshops, functioning here from the IV th. to the VI th. c. A.D. To this late phase is also connected another luxurious house located in the northern part of the insula, with a large room decorated by a beautifully colorful mosaic from the VI th. c. A.D.

Although earlier – Italian, American and English – missions working in Ptolemais have revealed several Roman villas, the excavations of the Polish mission should bring important discoveries: it is for the first time that an entire insula is to be uncovered, shedding light on the functioning of the whole domestic complex from the III rd. c. B.C. to the VII th. c. A.D.

An important domain of the Polish works in Ptolemais is the conservation of the discovered mosaics, paintings, coins and sculptures. Along with our Libyan colleagues we plan to prepare the material for exhibition in the local museum, thus underlining the fact that protection of world heritage, is as important as the research work.